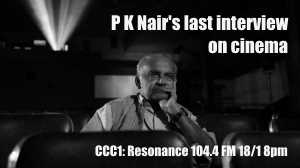 Update 22/3/17: This was P K Nair’s last long interview about cinema. We’re humbled to have had this opportunity to spend time with one of the heroes of world cultural preservation. Mr Nair became our friend after this interview and we miss him very much.

Read Shruti Narayanswamy’s and Tim Concannon’s appraisal of the internationalism of P.K. Nair, the celluloid man, on the Sight and Sound website.

Chin Chin Chu is an irregular trip to India, looking at its culture from some unusual angles. In the first episode we travelled to see water harvesting in the Thar desert with the grassroots charity GRAVIS, hipster hell-raising in Delhi, and to Pune to discuss twenty missing film classics with the father of Indian film preservation, and the subject of the recent documentary ‘Celluloid Man‘, Mr P K Nair.

For more on ‘Hunterwali’ and the list of 20 missing lost classics, see Shruti’s site.