A list of planned editions of ‘Music for Films‘. 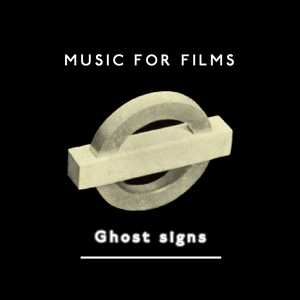 A section of a draft chapter from the book that goes with the Scala Underground film map, ‘The Electric Notting Hill’, which tells some of these stories in more depth is here.

The Tube is defined by its negative, empty and unused spaces as much as it is by its “positive” and still-functional ones. The London Underground system is full of false-works, the discarded detritus and gubbins of a century and a half of continuous use and expansion.

There are abandoned stations like Strand, which often doubles in films as a functioning terminus, such as in 2014’s ‘The Imitation Game’. There are vanished stations like Broad Street, which features in the title of Sir Paul McCartney’s unfairly forgotten 1984 film ‘Give My Regards to Broad Street’. There are entire abandoned railway lines like the Central & South London Railway and the London Pneumatic Despatch railway (LPD). There are stations which never existed, yet which persist in the public’s imagined version of the Underground through films that are set in them, like Hobbs End from 1967’s ‘Quatermass and the Pit’.

The London “ghost signs” map will be a guide to the most mundane of Science Fiction alternate worlds: it will bring together the closed stations, “lost rivers”, the disused rail lines, kiosks that have become follies, the air raid shelters, discarded plans for the Underground, the folkloric and fictional Tube, in one grand visualistion of the London that almost was.

What if?… there were more stations near Fulham and Chelsea, like Brompton Road, which closed in 1934? Would Cheyne Walk have been such a des res in the Sixties, when the “man of infinite wealth and taste” Christopher Gibbs played host to the likes of William Burroughs in 1966, and to the Swinging London party scene in ‘Blow Up’?

What if?… Fred Astaire had been caught up in the 21st December 1928 Holborn gas explosion on his way to the Prince Theatre? 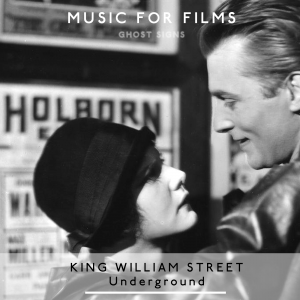 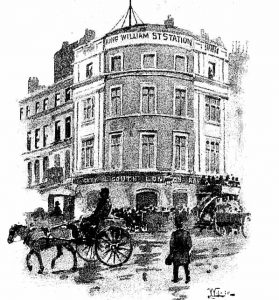 Opened in 1890 and demolished in the 1930s, King William Street tube station was the original northern terminus of the City and South London Railway (C&SLR), the world’s first electrified railway and the first deep-level underground line in London.

For speed and efficiency it was also the first railway to do away with paper tickets altogether, and with fares sold by ‘class’. Everyone who paid 2d to go through a turnstile on the C&SLR was equal once they got on board one of three cars, accommodating thirty-two passengers seated opposite one another on two benches, a narrow row of high windows above. The constricted carriages were soon being called “padded cells”. In 2018, Britain’s privatised railways overground continue the Victorian system of retaining a (usually empty) and more expensive ‘first class’ carriage or two. Meanwhile, below ground, people of all classes and backgrounds are charged the same, reassuringly exorbitant amount by Transport for London to use the publicly-owned Tube. The egalitarianism implicit in the Underground’s DNA was a product of the need for speed, efficiency, economy with time, energy and materials, constrained by what was technologically possible at the end of the 19th Century.

ILN plate showing a C&SLR carriages and locomotive. Note the narrow windows along the top of the passenger cars.

Recently restored by BFI, in his 1928 film ‘Underground‘ director and screenwriter Anthony Asquith seized on the new human interactions that were happening every day below the city streets on an expanding London Tube. Filmed partly at Elstree studios and also on location in London – including scenes shot at the ‘Chelsea Monster’, Lots Road Power Station – Elissa Landi stars as a shop girl and Brian Aherne and Cyril McLaglen are the porter and electrician, respectively, who both fall in love with her after chance meetings on the Underground. There are two uncredited co-stars of the film: the people of London, ascending and descending on escalators and crowded into trains; and the Tube itself, the tunnels and platforms providing dramatic and literal tracking and iris shots.

The C&SLR was incorporated into the City branch of the Northern line under public ownership in 1933, but the London which the line built lives on. In ‘Underground’, we can see its debut: high-speed, frenetic, anonymous but full of possibilities for connections. Landi could be seen as the flapper-era version of Gwyneth Paltrow’s character in ‘Sliding Doors’. 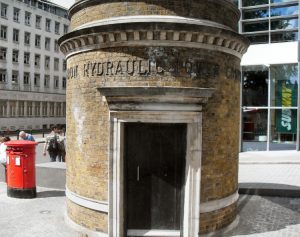 The precursor of the C&SLR was the Tower Subway, dug using the same Barlow-Greathead patented system and from which “the Tube” takes its name. By the Tower of London ticket office, on a street called ‘Petty Wales’ and next to a ‘Subway’, is a drum-shaped yellow brick kiosk with a wooden door, painted black. Behind this doorway, when it opened on 2nd August 1870, was the steam-powered elevator that carried passengers down the 18 meter-deep access shaft to the Tower Subway. Having housed a Thames Water main, the Tower Subway now contains fiber optic cables belonging to Cable & Wireless Worldwide, who may let us wander down it if we ask nicely. English Heritage declined in 2013 to grant the kiosk a Grade II listing or Scheduled Monument status, concluding in its report that ‘the engineering interest lies principally in the tool [the Barlow-Greathead “shield”] rather than the structure, which is physically modest and therefore does not meet the criteria for listing at a national level’. 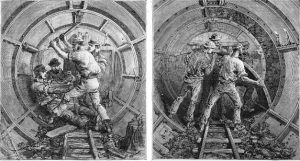 Before the Tower Subway was built, the first ever subaqueous tunnel – constructed by Brunel under the Thames from Wapping to Rotherhithe – took 18 painstaking years, bricked-lined as the builders moved forward by a few feet at a time. Though the Thames tunnel is now incorporated into the overground route to Rotherhithe, the engine room and ventilation shaft are now a Brunel museum, with a trippy atrium which you can hire for events.

The C&SLR tunnels were widened as part of a mass-employment scheme in 1922 and several of its tunnels and stations were abandoned. Some are visible above ground, like City Road. Others, like King William Street station, were demolished. Although the original northern terminus of the C&SLR was knocked down in 1933, its vaults below ground have had others lives: as an air-raid shelter in WWII, and now as an access shaft and storage space for the upgrade of Bank station.

Besides the Tower subway, there are accessible parts of the C&SLR we could visit if we ask nicely:

The old C&SLR tunnels that connected Borough to King William Street aren’t accessible north of London Bridge, nor is the access passage under Old Swan Lane that now acts as a pump
shaft.