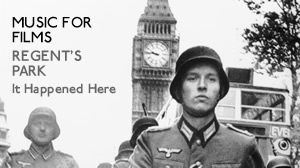 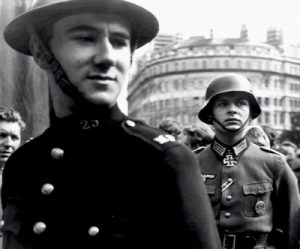 First broadcast 6am, 24th September 2016 on Resonance FM in London

Over eight years, directors Kevin Brownlow and Andrew Mollo made ‘It Happened Here‘, a chillingly believable depiction of a Nazi dominated England and of the brutality of partisan resistance. Incredibly, given the nuance and sophistication of the film, they began it as teenagers, shooting on 16mm with volunteer extras, some of whom were real Blackshirts. The American trailer cost more than the entire budget of the actual movie.

One of the favourite films of our guest Pat Mills, legendary comics author and editor of ‘Battle’ and ‘2000AD’, the film’s discussed in light of the clear and present dangers of national myths about two world wars.

We also play ‘Station to Station’, the game connecting films on our Scala map of London underground cinema via cast and crew.

This month we connect ‘The Company of Wolves’ via ‘An American Werewolf in London’ to ‘Peeping Tom’ and ‘It Happened Here’.

In the show, we give shout outs to our comrades in arms in radio and podcasting, James DC, Atomic Bark and State of Theory podcast.

Music for Films: It Happened Here