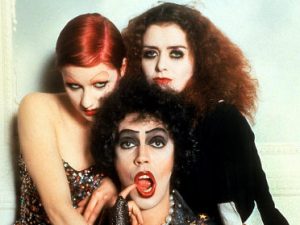 First broadcast 6am, 22nd October 2016 on Resonance FM in London

2 and a half hour podcast version. Not safe for work.

Interesting people talk about the music, films and music for films which have shaped their lives.

Tim and Roz Kaveney are joined by DJ and film scholar Lexi Turner at Sloane Square, where the original production of the Rocky Horror Show was staged at the Royal Court’s Theatre Upstairs to 63 people in June 1973.

A remake, starring Laverne Cox from ‘Orange Is The New Black’ as Frank-N-Furter was broadcast on the US Fox TV network in October 2016. How does the original hold up, more than forty years later? We also ponder Mohammed Shebl’s 1981 Egyptian ‘remake’ of Rocky Horror, ‘Anyab‘ aka ‘Fangs‘.

In the podcast, Tim and Roz discuss Rocky Horror in light of some trans history and Jennie Livingston’s 1990 documentary ‘Paris is Burning‘ about New York drag queens. Savas Arslan and Cem Kaya, director of ‘Remake, Remix, RipOff‘ about Turkey’s Yesilçam film-makers, give us some insights into Turkish cinema’s take on Dracula. Tim and Shruti count down their top ten of ‘Yanksploitation‘ films, remakes and ripoffs of American movies in other cultures which subvert the original material.