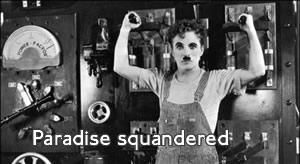 Do androids dream of Electric Cinemas?

In the original ‘Blade Runner’ (1982) directed by Ridley Scott, based on Philip K Dick’s Science Fiction novel ‘Do Androids Dream of Electric Sheep’, screenwriters Hampton Fancher and David Webb imagined Los Angeles two years from now in November 2019 as an Art Deco future, broken and baroque. Creators of Science Fiction are generally of the view that the genre is very bad at predicting the future, and this is invariably true except in cases like ‘Blade Runner’, when it gets it almost exactly bang on; but ‘Blade Runner’ was predictive in oblique ways, in terms of how the present day feels rather than how it looks.

Webb and Fancher’s retro-noir LA of 2019 is full of giant TV screens dominating everyone’s field of view, like those in Kabukicho in Shinjuku prefecture, Tokyo, or Times Square in New York. Flying cars descend through columns of ceaseless acid rain. Aerial blimps advertise a better way of life on the off-world colonies. (Blimps have become the universal signifier in SF cinema and TV of our being in an alternate timeline). Sky scrapers in the ‘Hades landscape’ of future LA vent flaming plumes of gas into the sky. Public phone booths contain video phones and the screens are always scratched and covered in graffiti. The mostly immigrant population of LA talk in ‘Cityspeak’, which in the narration clumsily tacked onto the original theatrical release of ‘Blade Runner’, Harrison Ford’s Private Investigator Deckard describes as “a gutter talk, a mishmash of Japanese, Spanish, German, what have you.” The Replicants that Deckard is sanctioned to hunt, in the 1982 film and in its 2017 sequel, are copies of human beings so perfect that you need to carry out a test on the empathetic blush response of their retinas in order to detect any difference. 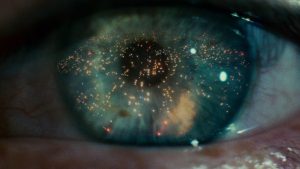 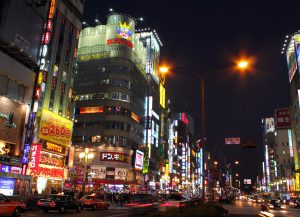 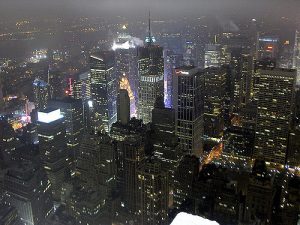 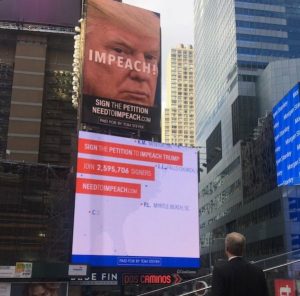 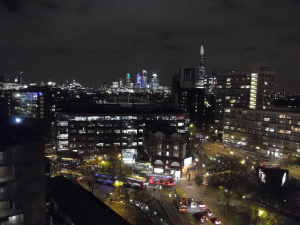 In the real 2017, the technology of driverless cars is still not quite there, and they don’t fly (yet). Sky scrapers emit light pollution though not gas flares. The screens which dominate our attention are black mirrors, the video phone in our hand, the corners of which are often cracked. People speak in a folkloric lingo (“bougie”, “ghost”, “troll”) that emerged, not in the “gutter” of immigrant-run urban spaces, but in the social space of electronic communications, where the internet (which didn’t exist in any meaningful sense in 1982) and smart phones meet.

Robots can turn impressive back flips – but aren’t so good at getting up – while human beings are replicants. Our waking thoughts are immersed in a diet of memetically self-reproducing fake news and hot takes, designed to addict us to what Irvine Welch has memorably called on Twitter an “underlying craving for false simplicity [leading to] shouty reductive binary choices & cheap dopamine hits on social media”. The product is fake people with synthetic, centrally-planned emotions. Cultural mood states are carefully stage-managed, predicated on low-level mass hysteria and ironic images of unicorns; a manufactured, simmering rage combined with a fixation on snarky humour.

The biggest similarity with the original ‘Blade Runner’, though, is the way that electricity has continued to free up the night since it was introduced in the first decade of the last first century. 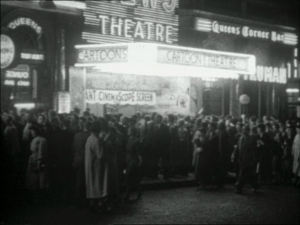 Electrical street and shop lighting appeared at the same time as the first Electric Cinemas, such as the one which is still running on Portobello Road, and the first purpose-built electric cinema, the Biograph, Pimlico (demolished, sadly, in 1983).

If you visit the Elephant and Castle area at night, the busy transport intersection around the corner from the Cinema Museum in Kennington has been transformed by flood-lighting. This is made possible by white LEDs, developed by Japanese manufacturers such as Panasonic and Nichia in the first decade of the Twenty First century. White LEDs have revolutionised public spaces throughout the world in mundane yet startling ways which SF cyberpunk authors such as William Gibson and Bruce Sterling didn’t foresee in the Japan-obsessed Eighties. While at Nichia, Japanese-American scientist Shuji Nakamura invented the blue LED which eventually made a white LED possible. He left the company in 1999 and eventually settled in 2005 for a US $9 million bonus from Nichia for his world-changing invention. Nakamura is also responsible for inventing the white LED and blue laser diodes in Blu-ray Discs, and is now a professor of Materials at Santa Barbara University in California. Shuji Nakamura can rightly claim to have invented the look of modern cities at night: bright, chiaroscuro and intense.

Light as a means of transforming space, and therefore our emotional state within that space, is another property of churches and temples which is shared with cinema architecture. Light manifests a sense of the imagination becoming temporarily solid and real. In Elephant and Castle, shapes that were once amorphous shadows suggesting menace, confusion and a sort of slow-motion societal decay are now rendered certain, explicable and safe by electricity.

It’s a trick of the light, the oldest form of magic, in which gods seem to come to life in the camp fire and angels and saints become real in the medium of stained glass. Philip K Dick never saw the completed ‘Blade Runner’, but according to the accounts in both ‘Future Noir: The Making of Blade Runner‘ by Paul Sammon and Mark Kermode’s Channel 4 documentary ‘On the Edge of Blade Runner‘, Dick was unhappy with the script he’d seen so the film’s producers arranged for a grumpy Phil Dick – who only had two months left to live – to be delivered by limousine to Entertainment Effects Group, the studio run by Douglas Trumball, the special effects maestro responsible for the look of Kubricks’ ‘2001’ and Trumball’s own ‘Silent Running’. After some griping about the script, a visibly unhappy Dick and his female companion were invited by visual effects supervisor David Dryer to watch ten minutes of effects footage (including the stunning opening, ‘Hades landscape’ sequence). Dick watched the footage and at the end asked if the projectionists could run it again. Dryer recalls:

“Now the lights come up a second time. Dick looks me straight in the eye and says, ‘How is this possible? How can this be? Those are not the exact images, but the texture and tone of the images I saw in my head when I was writing the original book! The environment is exactly as how I’d imagined it! How’d you guys do that? How did you know what I was feeling and thinking?!'”

“Let me tell you, that was one of the most successful moments of my career. Dick went away dazed.”

Cinema, and cinema buildings, connect the past, the present and the future in our imagination because of this magic ‘trick’ of the light, summoning up things we remember or have visualized in our heads, into a kind of temporary, solid reality.

To walk at night from Elephant and Castle Tube station, round a corner, down a little side street away from deafening traffic noise, through a gate to the relatively quiet seclusion of the Cinema Museum, what was once the Lambeth Workhouse, is to experience the diversity of use that urban planners since Jane Jacobs in her book ‘The Death and Life of Great American Cities‘ have advocated since the early Sixties:

‘This ubiquitous principle is the need of cities for a most intricate and close-grained diversity of uses that give each other constant mutual support, both economically and socially. The components of this diversity can differ enormously, but they must supplement each other in certain concrete ways. I think that unsuccessful city areas are areas which lack this kind of intricate mutual support.’

Elephant and Castle by dark is a flood-lit international village of cafes, fast food outlets, bars and late-night shops, with the Cinema Museum almost hidden away in one quiet corner; an exemplary arts venue and historical collection with an open door policy to new promoters and film programmers.

London has a choice. It can continue to be a world city full of scholars, thinkers, poets, film-makers, musicians, aspiring cabaret performers, painters, novelists, fashion designers and architects, the London that was celebrated in the 2012 Olympics opening event. Or it can become the wet weather version of the island of Jersey, furnishing the lifestyle of Russian oligarchs, tech billionaires and Saudi princes suggested in the Paradise Papers; a sterile cultural lacuna, where people live inside the equivalent of gold bricks and most street life and culture exists for the benefit of a pampered elite. Boroughs such as Putney and Chelsea, the other side of the river Thames, are well on their way to being closed at night, effectively, like banker’s cities such as Geneva.

The owners of the Cinema Museum building, South London and Maudsley NHS Trust, have already rejected an offer to keep the Museum – an institution which Lambeth council, the British Film Institute, and pretty much anyone else with an interest recognizes as a unique community asset – a plan which would have included building social housing on adjoining land. The Museum is sited over Transport for London tunnels, so it’s not able to support a high-rise structure. Whatever offer is made by a developer to SLaM is unlikely to result in a huge revenue stream for the NHS. The deliberation about the Museum’s future is one manifestation of the grotesque systemic pressure now placed on public institutions in the UK, who must join in a race for the bottom where community assets are sacrificed for a quick – and usually meager – profit.

The residents of Grenfell Tower in the Grenfell Action Group had warned on their website since 2013 of their concerns about fire safety. “Why didn’t any of us see the Grenfell action blog?” Jon Snow asked in his MacTaggart Lecture at the Edinburgh International Television Festival. London’s elite is interested in preserving a three-storey chunk of ‘brutalist’ Robin Hood Gardens council estate in the V&A Museum, as a relic of social housing, but the elite isn’t interested in building affordable homes for Londoners that don’t catch fire.

London in 2017 is the city where a disused Hackney pub becomes a “cockney” nativity play this Christmas, in which Zebedee Productions charges people £55 to watch an ‘immersive’ dinner theatre of crude working class stereotypes, rather than the pub being an actual pub, where everyone in Hackney could enjoy Christmas without being artistically interpreted or sneered at.