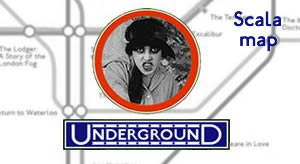 We’ve made the map to celebrate the annual Scalarama film festival, which happens all across the United Kingdom in September and in an independent cinema or living room near you.

Here’s a link to the map on its own page. Here’s a guide for £4 to the entire map, listed in order by film, date and Tube station, plus seven linked essays exploring London from the pre-Roman city to Brexit Day 2019. 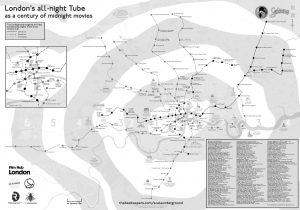 Scala map of the London Night Tube (not all 267 stations) as a century of midnight movies, A3 jpg.

Scala map of the Night Tube, A3 PDF.

Fancy making your own one? Here are the kml and kmz files.

If you’re making maps based on Transport for London’s intellectual properties please respect their copyrights which are not in the public domain. Generally speaking, you’re on reasonably safe ground basing your designs on anything from before Harry Beck’s designs.

Thanks to Roz Kaveney, David Cairns and Shruti Naryanswami, Jane Giles, Helen DeWitt, Will Fowler and Vic Pratt at BFI, Stephen Woolley, Kim Newman, Phil Foxwood and Michael Pierce at Cinema Nation for all their help and advice.

This work is licensed under a Creative Commons Attribution 4.0 International License.

Previous: The Future is Handmade: Delia Derbyshire’s Universes of Sound
Next: Chin Chin Chu: Mission One