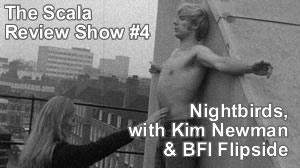 Recorded at a screening at Genesis Cinema, near to where the film was shot in Whitechapel.

(NSFW: you can just about hear somone yell “fuck” and a “cock-sucking sonoffabitch” during the Nightbirds trailer, and we play The Married Monk’s ‘Roma Amor’ which includes the word ‘pissing’; but we did take out a “shitty” after broadcast to describe what’s left of 169 Commercial Road).