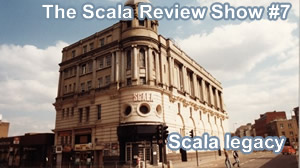 In the last show of the current series of The Scala Review Show, Roz Kaveney and Tim Concannon talk to film producer Stephen Woolley, Janes Giles and Helen Dewitt from the British Film Institute, all of whom used to work together at the legendary Scala film club, first on Charlotte Street and then at Kings Cross. They discuss the club’s legacy, as well as film exhibition today through pop up cinema and festivals like Scalarama. Also monkeys.