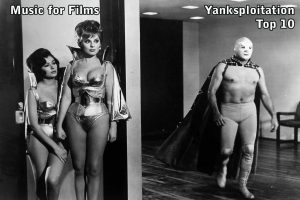 Shruti Narayanswamy and Tim Concannon run through their Top 10 of exploitation movies from around the world riffing on American cinema. From Turkish Captain America to the Indian ‘Exorcist’, briefly stopping by David Bowie’s ill-advised flirtation with the occult, and taking in Mexican wrestling fairy tale monsters, Iranian and Egyptian vampires, Australian biker flicks, and that time Jackie Chan saved Canada…

Put simply, exploitation cinema means that some feature or gimmick of the film is exploited in order to hook an audience in.

In the spirit of Barnum and Bailey’s circus, that usually means something is exploited which makes for an eye-popping poster. A fifty foot woman, a giant insect, or even the humble, common or garden ‘Sharknado‘ can lure in a crowd. Sex sells. Violence also sells. If you can combine sex and violence, everyone wins!

From the 1920s, pioneers of US exploitation films defied the censorship of the big studio’s self-imposed Hays Code. They banded together as the Forty Thieves, exhibiting mostly in the Mid and South West, leaving both coasts and the big cities like Chicago and St Louis to the majors, while they churned out thousands of low-budget movies over the decades for people in places like Akron, Ohio, Deming, New Mexico and Flemingsburg, Kentucky.

By the Sixties, ‘grindhouses’ and drive-ins had become the main place where film-goers in North America could find cheap and dirty thrills. Without a doubt, and for all time, the reigning emperor of drive-in and grindhouse exploitation cinema is Roger Corman. Corman gave Martin Scorcese, Francis Coppola, Jack Nicolson, Peter Bogdanovitch and Ron Howard their starts as film-makers.

In the Eighties, directors like Fred Olen Ray and studios like Troma used the same huckster-aesthetic to clean up in the straight-to-video and straight-to-DVD markets.

Now that DVDs are giving way to streaming content, and with only a couple of sites like Netflix and Amazon actually paying money to producers, it looks like the exploitation age is probably over, at least in American cinema.

‘Yanksploitation’ is what’s happened when film-makers and exhibitors from elsewhere in the world have ripped off something from American movies – Superman, or a property that’s already successful, like ‘The Exorcist’ – which hooks the audience in; but the actual movie is tailored to the specific tastes and reference points of the local audience. If your first language is English, then Turkish Spider Man isn’t anything like the Peter Parker you think you know.

All exploitation cinema has its roots in circus and carnival traditions which are common all over the globe: spooky puppets, freak shows, haunted mazes and hay rides, and ‘miracle’ snake oil cures. The term can cover everything from horror, sleaze, Science Fiction and Hell’s Angels biker pictures, medical procedures, morality tales about venereal disease and the dangers of drugs, to travelogues, religious movies and films made for specific audiences, like kids.