Often mistakenly referred to as a remake of ‘The Rocky Horror Picture Show’, Mohammed Shebl’s 1981 film uses Richard O’Brien’s film-of-the-musical as a starting point for a commentary on Egypt’s complicated attitudes to sexuality, money and pleasure; attitudes which are rarely, if ever, discussed in a country where LGBT people have been systematically stigmatised and targeted since independence by regimes of every political and religious persuasion.

Shebl, as well as being a film director, was also a diplomat, film critic, screenwriter, talk-show host, radio DJ, and friend of the eminent English historian and scholar Arnold Toynbee. Shebl died from liver disease at the age of 47, but not before he made several films in Egypt in the 1980s which were riffs on American films, including ‘Rocky Horror’, ‘The Exorcist and ‘A Nightmare on Elm Street.’

A “funny foreign man directs a crude remake” attitude to Arabic cinema fails to take into account the political and intellectual sophistication with which – in a climate of moral and state censorship across the Middle East – exploitation film-makers like Frank Agrama and Shebl approached a swinging Sixties spy caper, like Agrama’s ‘That Man From Tehran’, or a funked-up, ambisextrous Bedouin vampire flick like ‘Fangs’.

Shebl’s Brad and Janet dream of one day sharing a flat and owning their own telephone. Shebl’s Rocky is a boxer, more Apollo Creed than Sly Stallone, in an Egypt in which the Nubian population of Southern Egypt have been systematically repressed, relocated and marginalised by regimes obsessed with the prospect of internal rebellions. When you get over the initial shock of a black performer having a speaking role in a film based on ‘Rocky Horror’, the fact that Rocky insists to the foreign instigator of all-night blood-drinking parties, Dracula, that he was the “first”, Shebl’s opaque inference becomes clearer. In the role of the narrator played by Charles Gray in ‘Rocky Horror’, Hassan Al Imam tells us that Dracula’s world is “pink and black”. Whatever could Shebl be trying to tell us?

Some of the musical sequences, and Shebl’s direction, knock the 1975 American film of the British trans-tastic musical out of the ring for sheer dramatic power and energy; especially the beautiful reworking of “There’s a Light (Over at the Frankenstein Place)” and “Touch-a, Touch-a, Touch-a, Touch Me”, which is vastly improved by the addition of Arabic percussion. 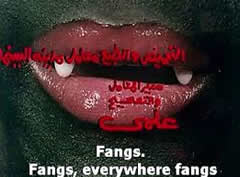