10. Little Red Riding Hood and Tom Thumb vs. the Monsters. 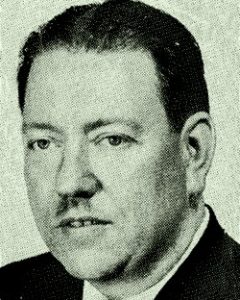 Growing up in Bloomington, Indiana, K Gordon Murray – son of the local funeral parlour owner – hung around circus performers who camped in the town during the long winters. As a teenager, Murray became a carnival showman, starting with a ‘corn game’ – which British people would recognise as ‘Bingo’ – and slot machine parlours. Helping to recruit carnival and circus folk to be Munchkins in MGM’s ‘The Wizard of Oz’, and assisting Cecil B DeMille to cast ‘The Greatest Show on Earth’ led Murray to move – first to Hollywood and then to Miami, Florida – where he set up a film production company and went into business with one of the pioneers of American exploitation film-making, Kroger Babb. 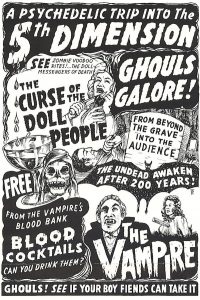 Famously, Murray imported and dubbed the ‘Santo‘ and ‘Aztec Mummy’ luchador masked wrestling movies from Mexico for the US market. He’s perhaps best know, though, for creating ‘kiddie matinee’ movies. These were films themed around the Christmas holiday season, usually, and shown in afternoons so that parents could off-load their children at a movie theatre for a few hours, in order to get some peace. Murray created this niche business when he imported René Cardona’s Mexican children’s fantasy film ‘Santa Claus‘ which includes an appearance by Satan himself in a confusing Christian allegory which also somehow ropes in Merlin. 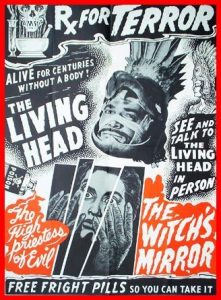 Of the dozens of Mexican movies Murray reworked to entertain bratty American pre-teens in the Sixties, ‘Little Red Riding Hood and Tom Thumb vs. the Monsters’ is by far the strangest translation of the lot. A live action Disney cartoon, made with professional wrestlers in ‘Trick or Treat’ costumes as bad guys, Dracula and Frankenstein find themselves co-existing with fairy tale characters like Tom Thumb and Puss-in-Boots.

Like Universal horror classics, fairy tales based on the Brothers Grimm are already set in an imaginary middle European, mid-19th Century world. Add to this some out of place cactus-lined roads, gigantic Central American muscle men in tiny lederhosen, and surrealist ‘comedy’ – which seems to have strayed in from the Jazz-era, having more to do with Betty Boop animated cartoons, than with Uncle Walt – and the overall result goes beyond being “so bad it’s good” to “so bad you’re not quite sure if you fell asleep and dreamed the entire thing under the influence of Lophophora williamsii, better known as ‘peyote’.”