After he was lamentably sidelined in the American-made ‘Canonball Run’ movies, and long before his successful move over to making films in Hollywood, the world’s number one action star Jackie Chan made a string of motion pictures – mostly co-starring Sammo Hung and Yuen Biao – like ‘Project A’, the ‘Lucky Stars’ trilogy and ‘Meals on Wheels’, all in an effort to get out from under the long shadow cast by the late Bruce Lee. This was something that all Hong Kong’s martial arts stars were trying to do in the early Eighties, after a decade of endless regurgitations of ‘Enter the Dragon’ and ‘Game of Death’.

‘Fantasy Mission Force’, which strictly speaking features Jackie Chan in several scenes rather than being a starring vehicle for him, tries to achieve this break with the past by dispensing with any semblance of plot. In fact, it does away with suspension of disbelief altogether, plunging the viewer over their head in a surreal, dreamlike pastiche of early Eighties’ action adventure genres.

After a Japanese attack on Canada in World War Two in which four Generals – including Abraham Lincoln (?!) – are kidnapped, a snatch squad of Hong Kong misfits, including Jackie Chan, is assembled to rescue them. (But only after Roger Moore’s James Bond, Snake Plissken from John Carpenter’s ‘Escape from New York’ and Sly Stallone’s Rocky are all rejected as not up to the job).

Not in any way bad, but not especially good either, ‘Fantasy Mission Force’ is a baffling 90 minutes spent somewhere between ‘Tropic of Thunder’ but made by Luis Buñuel, a Benny Hill sketch, and definitely nowhere near Mr Han’s island.

Bruce Lee also tried to break out of the “martial arts killing machine” stereotype long before his incredible worldwide success in ‘Enter the Dragon’. A sensitive man, sympathetic to the flower power ideas of the hippie movement, as was his contemporary Peter Fonda, Lee had been a prize-winning ballroom dancer when he lived in California prior to landing the role of Kato, the chauffeur-cum-sidekick in TV’s ‘The Green Hornet’. 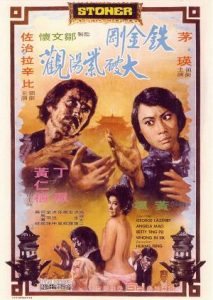 Had Lee lived, his next role would have been facing ex-Bond George Lazenby and Japanese film star Sonny Chiba. Meanwhile, with ‘The Man With the Golden Gun’ Bond’s producers tried to cross-over two Hong Kong and Western genres, spies and martial arts. As did Hammer and the Shaw Brothers in their co-production ‘The Seven Golden Vampires’, also starring Christopher Lee, as Dr Fu Manchu. ‘Fantasy Mission Force’ is the crunk kung fu master to ‘The Man With the Golden Gun’ that never was.

There are martial arts films which out-Hollywood Hollywood more effectively, like the incredible 1982 remake of ‘Buddha’s Palm’ aka ‘Legendary Weapons of China’ – which boasted three female Jedi knights back when a 15 year old J J Abrams was still working on his first job in movies, the music for ‘Nightbeast’ – but ‘Fantasy Mission Force’ is the most deadly!