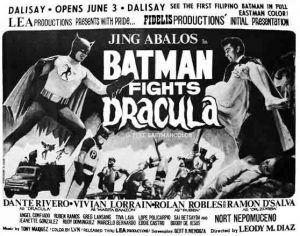 More liberties taken with US-copyrighted properties by Asian film-makers, this time in the Philippines. Leody M. Diaz’s now-lost 1967 colour film is one of the many examples of vanished movie classics of the Pacific region, most of which are recorded in Nick Deocampo’s book ‘Lost Films of Asia‘.

‘Batman Fights Dracula’ presents the worldwide film restoration and conservation movement with a direct challenge: who gets to decide what masterpieces deserve to be hunted for and, like the King of the Vampires himself, Vlad Tepes, resurrected from the dead? Who’s to say that in the future a film like ‘Batman Fights Dracula’ won’t be valued and seen as of similar cultural value to, say, a lost early Filipino film based on Wagner’s ‘Ring Cycle’?

Had Florence Stoker, widow of Bram the author of the novel ‘Dracula’, had her way, there’d be no prints of Marnau’s ‘Nosferatu’ in existence. Florence Stoker fought to have the film expunged from reality. Her legal battles with Murnau’s producers became the basis of many of the modern copyright laws in America, which prevent US or European film-makers from making their own ‘Batman Fights Dracula’ without Warner Brothers also making mega-bucks.