4. Not Quite Hollywood: The Wild, Untold Story of Ozploitation!

The Australian film industry was able to take advantage of the relaxed censorship laws from 1970 to make a series of rip-offs of American movies that, through films like the 1974 Golden Harvest co-production ‘The Man From Hong Kong‘ starring one-time Bond George Lazenby as a gangster, and especially through the ‘Mad Max’ franchise, established an enduring legacy of gritty and realistic action and horror cinema. 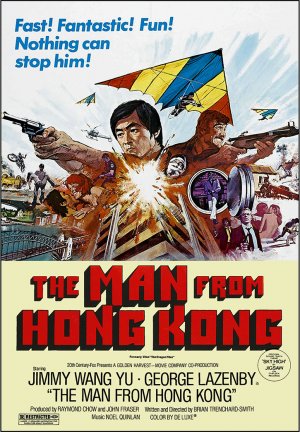 In Mark Hartley’s 2008 documentary, Quentin Tarrantino enthuses about the 1974 Aussie biker flick ‘Stone‘. 1980’s ‘Harlequin‘ – a paranoid and bizarre mash-up of ‘The Omen’, ‘Equus’ and ‘The Power Within’ – was meant to star David Bowie and Orson Welles in a retelling of the Rasputin myth. After the producers got cold feet about casting Bowie, and Welles wanted too much money, they instead cast ‘Jesus of Nazarteh’ star Robert Powell, David Hemming from Antonioni’s ‘Blowup’, and Broderick Crawford instead of Welles, from ‘Won Ton Ton, the Dog Who Saved Hollywood’ and the ‘Rosemary’s Baby’ sequel, ‘Look What’s Happened to Rosemary’s Baby’.

Russell Mulcahy – director of Duran Duran videos and two ‘Highlander’ movies – made his second feature in 1984, after a ‘Derek and Clive’ documentary, Jaws-in-the-outback-but-it’s-a-wild-hog-flick, ‘Razorback‘.

Made in the same Orwellian year, ‘Turkey Shoot‘ was a sexploitative prison chain-gang breakout picture combined with ‘The Most Dangerous Game‘. It starred Lynda Stoner from Australian TV’s ‘The Young Doctors’ and ‘The Paul Hogan Show’, and British actor Michael Craig as a camp commander for ‘social deviants’ called ‘Thatcher’. See what they did there?