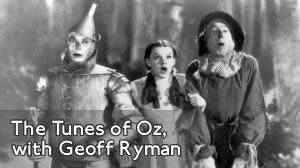 Here’s some material I gathered while doing my own research for the shows.

Geoff’s novel ‘Was‘ takes the reader on a journey through time and space, from Kansas in the 1860s to the late 1980s in California.

BFI Library synopsis: “A documentary on the Oz books of L. Frank Baum and the films and fantasies that they inspired, particularly the first book `The Wonderful Wizard of Oz’. It includes clips from the several silent film versions of the stories produced by Baum that have survived as well as the 1939 film with Judy Garland, and interviews with such enthusiasts as Salman Rushdie, Gore Vidal, Ray Bradbury, Geoffrey Ryman and Nora Ephron.”

The Wonderful Wizard of Oz – The True Story BBC Four documentary on Baum.

From 3:05, Arlen’s relatives tell a story about where he thought of the “da DA, da da-da-da dah” melody. He asked his wife to drive him to a movie at Grauman’s Chinese Theatre. As they drove past Schwab’s Pharmacy at 8024 Sunset Boulevard, Arlen asked his wife to stop the car as he’d thought of a tune. Maybe something that Arlen saw as they were driving, something about the vista, crystalised the elements of the melody in his mind. The pharmacy was demolished in 1988.

There are more photos here and here. I shall try to find pictures of the whole of that section of Sunset in 1938. I wonder what Harburg was looking at as they drove along… Out of the passenger seat, he would have seen the Hollywood Hills on his right but not all that well going by the view with the current skyline.

Radio Four’s ‘Soul Music‘ broadcast on September 11th 2001. Not to say, for the zillionth time, that the song is all about death. Not at all…

Barbra Streisand and Harold Arlen duet on a cheesy but sweet rendition of ‘Ding Dong the Wicked Witch is Dead’.

At random, I looked up “friend of Dorothy” on Wikipedia:

In the early 1980s, the Naval Investigative Service was investigating homosexuality in the Chicago area. Agents discovered that gay men sometimes referred to themselves as “friends of Dorothy.” Unaware of the historical meaning of the term, the NIS believed that there actually was some woman named Dorothy at the center of a massive ring of homosexual military personnel, so they launched an enormous and obviously futile hunt for the elusive “Dorothy”, hoping to find her and convince her to reveal the names of gay service members.

(In the ‘Music for Films’ show, Geoff doesn’t buy the link between the MGM movie and the term “friends of Dorothy”).

The Tunes of Oz, with Geoff Ryman

Next: The Future is Handmade: Delia Derbyshire’s Universes of Sound